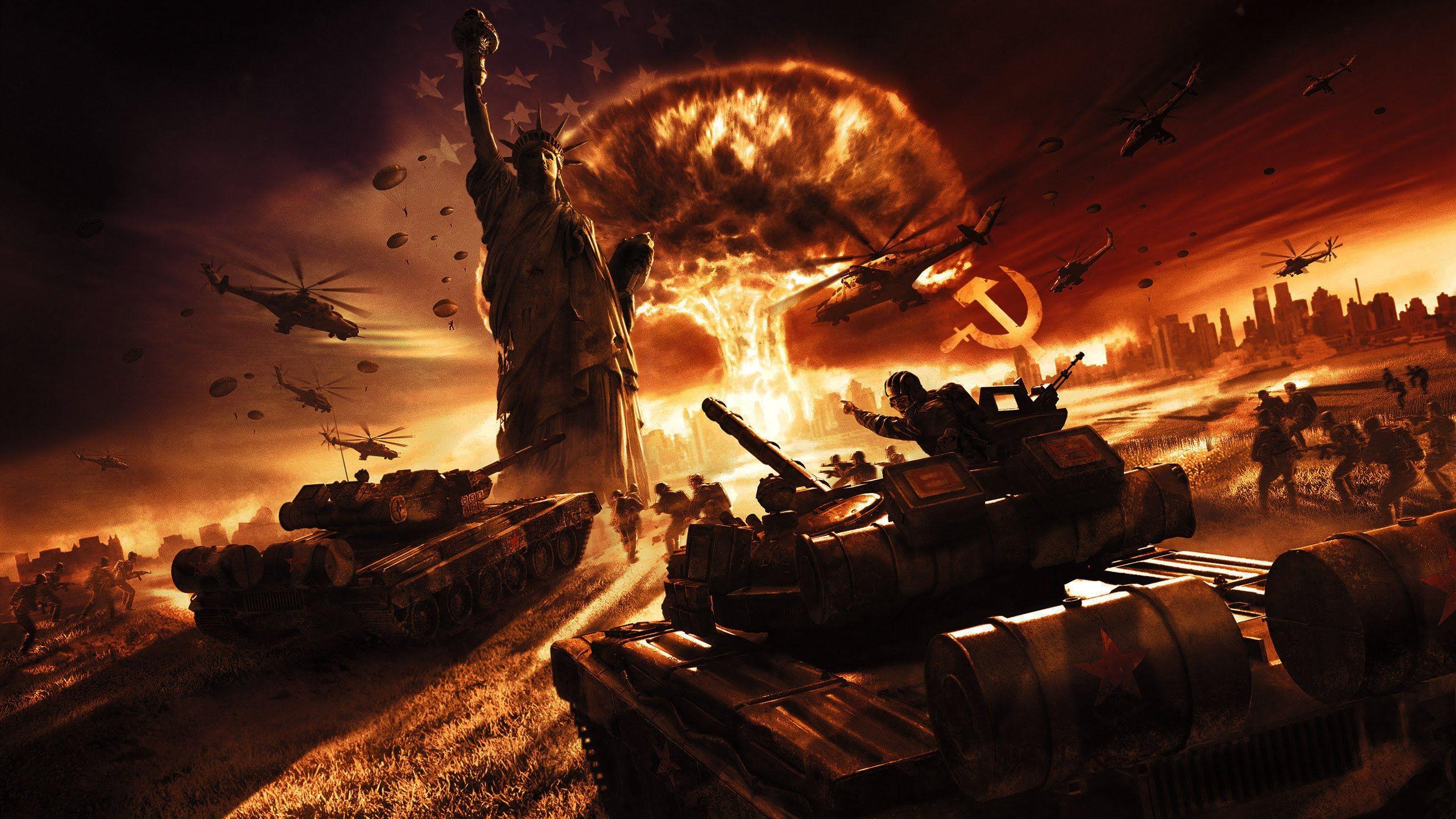 I am convinced that we are much closer to the end than most people will believe.  One of the very next things that must happen is war which brings death to 1/3 of the world’s population.   This could happen any time now.  People who know much more about politic and the military actions that are taking place right now, are WARNING that we could een nuclear attacks sometime very, very, very soon.  HEADS UP!
spacer
If you have not seen the following post, check it out:

The Evidence Herein May Shock You

The seven trumpets are a series of disasters that strike the earth, and they comprise about 20% of the book of Revelation, from chapters 8 through 11. Although they are such a central part of Revelation, there is very little agreement among commentators as to what they are. In order to identify them it is essential first of all to know if they are literal or symbolic, and if they have already take place in history or are still future.

The extensive use of simile [1]in the first six trumpets (chapters 8,9) suggests a fairly literal interpretation.  John saw  “something like a great mountain burning with fire…the shape of the locusts was likehorses…their faces were like the faces of men…” etc.  The words forlike  (Greek hos, omios) are used to indicate a similarity between two things that are compared rather than a metaphorical or symbolic usage.

Moreover, the chiastic structure of Revelation has the first 6 trumpets paired with the Seven Last Plagues, which are basically literal. This suggests that John saw real events and tried to describe them as best he could with the limitations of language that did not have words for things that did not exist at that time. For example, one author has fairly convincingly shown that the “locusts” of the fifth trumpet could describe attack helicopters.

The context of the seven trumpets suggest that they are still future. In chapter 7 the angel instructed that the four winds, which would harm the earth, sea and trees, should not be released until the 144,000 were sealed. The trumpets harm the earth, sea and trees, which suggests that they take place after the sealing of the 144,000, which takes place at the end of time.

Thus the trumpets appear to describe a war that takes place at the end of time. Language links (that are examined in chapter 9 of The Book) show that this is the same war that is described in the book of Joel, and the last phase of the war between the King of the North and the King of the South that is described in Daniel 11, a war that pits the forces of militant Islam against an American and European alliance. This war will cause intense human suffering and will result in the death of 1/3 of the earth’s population. While this war is taking place the 144,000 will give the last message of God to the world, calling people to repent and to come out of Babylon.

If this interpretation of the trumpets is correct, we need to know as much as we possibly can about what is going to take place and how we can survive it. There is a lot more information and scriptural support for this vital subject in chapters 8-11 of The Book.

Warnings this is about to get much worse, Putin readies for NATO attack | Redacted w Clayton Morris

Col. Douglas MacGregor joins Redacted with the very latest warning signs of NATO and multinational forces mounting for an invasion of Russia. Putin continues the mobilization of forces. Military whistleblowers are demanding answers for vaccine mandates that forced 80,000 members of the armed forces out of their jobs. Trudeau asked for help from the FBI in the trucker convoy crisis.

The media playback was aborted due to a corruption problem or because the media used features your browser did not support.
Russia issued what appeared to be a veiled warning to the U.S. and other Western nuclear powers that failure to refrain from certain “provocations” can result in a nuclear catastrophe.

Russia’s Foreign Ministry released a statement “on the prevention of nuclear war” on Wednesday, calling on other nuclear powers to “abandon dangerous attempts to infringe on each other’s vital interests, balancing on the brink of direct armed conflict and encouraging provocations” with weapons of mass destruction (WMD). Such provocations, the ministry said, “can lead to catastrophic consequences.”

In referencing nuclear powers, Russia was specifically referring to five countries—China, Russia, the U.K, the U.S. and France—that committed in a January joint statement to preventing nuclear war and reducing “strategic risks.”

In its Wednesday statement, Russia’s Foreign Ministry detailed its nuclear doctrine that states Russia can hypothetically use nuclear weapons “only in response to aggression carried out with the use of WMD, or aggression with the use of conventional weapons, when the very existence of the state is threatened.” It also said that Russia is guided by the notion that nuclear war “must never be unleashed” since “there can be no winners.”

The statement came as the conflict in Ukraine exceeds 250 days and Western nations like the U.S. continue to assist the war-torn country with weapons, defensive equipment and other supplies. Russian President Vladimir Putin has criticized the U.S. for alleged interference in the war over its continued efforts to aid Ukraine, but the backlash has so far failed to stop the support.

Russian officials and state media pundits have repeatedly issued veiled or blatant nuclear threats against Ukraine and the U.S., spurring fears of a disastrous nuclear war. One of the most direct of such threats came from Putin himself, who said in September that he was willing to respond to what he described as the West’s “nuclear blackmail” by using his country’s own weapons.

In light of Russia’s Foreign Ministry releasing the statement on nuclear war prevention, Jonathan Katz, the director of Democracy Initiatives and a senior fellow with The German Marshall Fund, told Newsweek that he thinks “there’s a clear effort by Moscow to ramp up nuclear rhetoric” and to “drive a wedge between allies and Ukraine.”

“They believe there are receptive audiences to this type of messaging. So, you’re constantly seeing Russia working this issue and others in an attempt to see where cracks may lie,” Katz said.

He added that Russia clearly feels that nuclear rhetoric can help them achieve objectives, but that doesn’t necessarily mean that Russia using nuclear weapons is a given. Last week, Putin tried to downplay concerns by saying that Russia saw “no need” to use nuclear weapons in the Ukraine war. But contradictory statements from other Russian officials “raise the specter of the use of these weapons,” Katz said.

Western aid has yet to dry up over Russia’s use of this nuclear rhetoric, Katz continued, but Western officials still seem to be taking the warnings seriously. When Russia last month accused Ukraine of planning to use a dirty bomb on its own territory and then blame Putin’s regime, the foreign ministers of France, the U.K. and the U.S. made a point to speak with Russian Defense Minister Sergei Shoigu over the allegations.

Michael Kimmage, professor and chair of the Catholic University of America’s history department, told Newsweek that in the Foreign Ministry’s statement, Russia may have been “walking back the sort of pretty extreme rhetoric Putin had put forward a few days and weeks ago where he seemed to be sort of doing the nuclear saber rattling.”

S.Korea responds with own missile launch as N.Korean missile lands near its coast | ANC

Stephen Gardner
Nov 2, 2022
1.06M subscribers
61,690 views  Get a 60-day free trial at https://shipstation.com/stephengardner. Thanks to ShipStation for sponsoring the show! New intel shows Iran plans to attack the United States and Saudi Arabia in the next 48 hours. Putin reinstates the grain agreement so millions won’t starve. The United states government finally gives money to help their own citizens and the stock market reacts to new Fed rate hike. Want to start an online business or Amazon store, use the same coach I am using with my own business. Alex, the owner is the BEST https://passionconsultingcollective.c…