Well, today is National Fibonacci Day.  Before you mark and celebrate it.  Maybe you should know a little about it.

Fibonacci is a contraction of filo Bonacci, meaning the son of Bonaccio. Date Sequence November 23 is celebrated as Fibonacci day because when the date is written in the mm/dd format (11/23), the digits in the date form a Fibonacci sequence: 1,1,2,3. A Fibonacci sequence is a series of numbers where a number is the sum of the two numbers before it.

Very much like our minds have been corrupted and controlled by the use of letters and language, mathematics has also played a key role in the deception.  Like all “modern science” and Magick/withcraft mathematics is full of “unprovable theories” and mystical craft created to keep the masses stupefied and awestruck.

One World – One Language

spacer
It is all allusion/deception, that is the biggest tool in the Devil’s arsenal.  That is why GOD commands us to “BE NOT DECEIVED”!

I am not going to spend a lot of time on this today.  When I saw that today was the day set to celebrate Fabiconni, I felt compelled to put some truth out there for any with eyes to see and ears to hear.

Little is known about Fibonacci’s life beyond the few facts given in his mathematical writings. During Fibonacci’s boyhood his father, Guglielmo, a Pisan merchant, was appointed consul over the community of Pisan merchants in the North African port of Bugia (now Bejaïa, Algeria). Fibonacci was sent to study calculation with an Arab master. He later went to Egypt, Syria, Greece, Sicily, and Provence, where he studied different numerical systems and methods of calculation.

When Fibonacci’s Liber abaci first appeared, Hindu-Arabic numerals were known to only a few European intellectuals through translations of the writings of the 9th-century Arab mathematician al-Khwārizmī. The first seven chapters dealt with the notation, explaining the principle of place value, by which the position of a figure determines whether it is a unit, 10, 100, and so forth, and demonstrating the use of the numerals in arithmetical operations. The techniques were then applied to such practical problems as profit margin, barter, money changing, conversion of weights and measures, partnerships, and interest. (Money/Mammon)  Most of the work was devoted to speculative mathematics—proportion (represented by such popular medieval techniques as the Rule of Three and the Rule of Five, which are rule-of-thumb methods of finding proportions), the Rule of False Position (a method by which a problem is worked out by a false assumption, then corrected by proportion), extraction of roots, and the properties of numbers, concluding with some geometry and algebra. In 1220 Fibonacci produced a brief work, the Practica geometriae (“Practice of Geometry”), which included eight chapters of theorems based on Euclid’s Elements and On Divisions.

The Liber abaci, which was widely copied and imitated, drew the attention of the Holy Roman emperor Frederick II. (Nothing Holy about Rome)  In the 1220s Fibonacci was invited to appear before the emperor at Pisa, and there John of Palermo, a member of Frederick’s scientific entourage, propounded a series of problems, three of which Fibonacci presented in his books. The first two belonged to a favourite Arabic type, the indeterminate, which had been developed by the 3rd-century Greek mathematician Diophantus. This was an equation with two or more unknowns for which the solution must be in rational numbers (whole numbers or common fractions). The third problem was a third-degree equation (i.e., containing a cube), x3 + 2x2 + 10x = 20 (expressed in modern algebraic notation), which Fibonacci solved by a trial-and-error method known as approximation; he arrived at the answer

in sexagesimal fractions (a fraction using the Babylonian number system that had a base of 60), which, when translated into modern decimals (1.3688081075), is correct to nine decimal places.

For several years Fibonacci corresponded with Frederick II and his scholars, exchanging problems with them. He dedicated his Liber quadratorum (1225; “Book of Square Numbers”) to Frederick. Devoted entirely to Diophantine equations of the second degree (i.e., containing squares), the Liber quadratorum is considered Fibonacci’s masterpiece.

It is a systematically arranged collection of theorems, many invented by the author, who used his own proofs to work out general solutions. Probably his most creative work was in congruent numbers—numbers that give the same remainder when divided by a given number. He worked out an original solution for finding a number that, when added to or subtracted from a square number, leaves a square number. His statement that x2 + y2 and x2 − y2 could not both be squares was of great importance to the determination of the area of rational right triangles. Although the Liber abaci was more influential and broader in scope, the Liber quadratorum alone ranks Fibonacci as the major contributor to number theory between Diophantus and the 17th-century French mathematician Pierre de Fermat.

Except for his role in spreading the use of the Hindu-Arabic numerals, Fibonacci’s contribution to mathematics has been largely overlooked. His name is known to modern mathematicians mainly because of the Fibonacci sequence (see below) derived from a problem in the Liber abaci:

A certain man put a pair of rabbits in a place surrounded on all sides by a wall. How many pairs of rabbits can be produced from that pair in a year if it is supposed that every month each pair begets a new pair which from the second month on becomes productive?

The resulting number sequence, 1, 1, 2, 3, 5, 8, 13, 21, 34, 55 (Fibonacci himself omitted the first term), in which each number is the sum of the two preceding numbers, is the first recursive number sequence (in which the relation between two or more successive terms can be expressed by a formula) known in Europe. Terms in the sequence were stated in a formula by the French-born mathematician Albert Girard in 1634: un + 2 = un + 1 + un, in which u represents the term and the subscript its rank in the sequence. The mathematician Robert Simson at the University of Glasgow in 1753 noted that, as the numbers increased in magnitude, the ratio between succeeding numbers approached the number α, the golden ratio, whose value is 1.6180…, or (1 + Square root of√5)/2. In the 19th century the term Fibonacci sequence was coined by the French mathematician Edouard Lucas, and scientists began to discover such sequences in nature; for example, in the spirals of sunflower heads, in pine cones, in the regular descent (genealogy) of the male bee, in the related logarithmic (equiangular) spiral in snail shells, in the arrangement of leaf buds on a stem, and in animal horns.

Alternate titles: Arabic numeral
By The Editors of Encyclopaedia Britannica Edit History
Hindu-Arabic numerals, set of 10 symbols—1, 2, 3, 4, 5, 6, 7, 8, 9, 0—that represent numbers in the decimal number system. They originated in India in the 6th or 7th century and were introduced to Europe through the writings of Middle Eastern mathematicians, especially al-Khwarizmi and al-Kindi, about the 12th century. They represented a profound break with previous methods of counting, such as the abacus, and paved the way for the development of algebra.

This article was most recently revised and updated by Noah Tesch.

number theory, branch of mathematics concerned with properties of the positive integers (1, 2, 3, …). Sometimes called “higher arithmetic,” it is among the oldest and most natural of mathematical pursuits.  (BS!)

Until the mid-20th century, number theory was considered the purest branch of mathematics, with no direct applications to the real world. The advent of digital computers and digital communications revealed that number theory could provide unexpected answers to real-world problems. At the same time, improvements in computer technology enabled number theorists to make remarkable advances in factoring large numbers, determining primes, testing conjectures, and solving numerical problems once considered out of reach.

BRITANNICA QUIZ
Numbers and Mathematics
A-B-C, 1-2-3… If you consider that counting numbers is like reciting the alphabet, test how fluent you are in the language of mathematics in this quiz.

Number theory in the East

Meanwhile, Indian mathematicians were hard at work. In the 7th century Brahmagupta took up what is now (erroneously) called the Pell equation. He posed the challenge to find a perfect square that, when multiplied by 92 and increased by 1, yields another perfect square. That is, he sought whole numbers x and y such that 92x2 + 1 = y2—a Diophantine equation with quadratic terms. Brahmagupta suggested that anyone who could solve this problem within a year earned the right to be called a mathematician. His solution was x = 120 and y = 1,151.

In addition, Indian scholars developed the so-called Hindu-Arabic numerals—the base-10 notation subsequently adopted by the world’s mathematical and civil communities (see numerals and numeral systems). Although more number representation than number theory, these numerals have prevailed due to their simplicity and ease of use. The Indians employed this system—including the zero—as early as 800 CE.

At about this time, the Islamic world became a mathematical powerhouse. Situated on trade routes between East and West, Islamic scholars absorbed the works of other civilizations and augmented these with homegrown achievements. For example, Thabit ibn Qurrah (active in Baghdad in the 9th century) returned to the Greek problem of amicable numbers and discovered a second pair: 17,296 and 18,416. 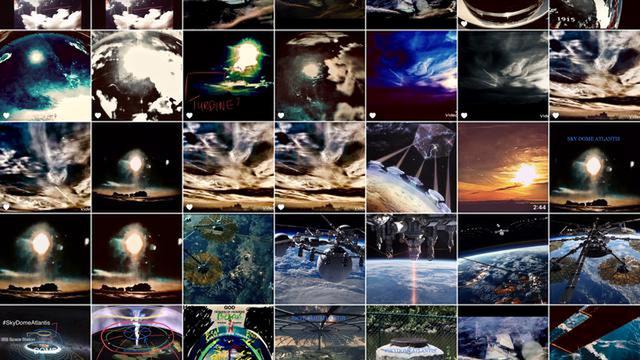 Sorry it took so long to get this out to you.  Don’t worry, it is all still very relevant.  I thought this was going to be very brief.  At first look it did not seem like there was much to see.  Boy, was I wrong.  I hope you enjoy discovering all that is here.  I … Click Here to Read More

– It is my great desire to instill in you the understanding that we are in a spiritual WAR 24/7.  The weapons of this war are not physical.  Not fists, or swords, or guns or rockets, or lasers.  This is a SPIRITUAL WAR, the weapons that the enemy uses against us are designed to destroy … Click Here to Read More

Tage: Pleiades, NASA, Cosmic Shift, Golden Nebula, super-consciousness, Ascension, Quikening, Fifth Dimension The PHOTON BELT seems to be an invention of New Agers/Magicians/UFO Worshipers and StarGazers.  The thing that you must be leary of is that it seems to be being used to explain away all the bizarre activity that is going on in our … Click Here to Read More

Tokyo 2020 Olympic Torch Relay Concept Movie Tags: Tokyo Olympics, Paralympics, Health Risks, Spirits, Japanese Culture, Venue, Set backs, Environment, COVID Impact, NWO Agenda Well, the Olympics are getting really close now.  I apologize for not getting this out to you sooner.  Here is my breakdown of the symbology and underlying purpose and message in … Click Here to Read More

The first publicized killing of the Zodiac was a Christmas murder.  The two young victims were supposed to attend a Christmas program that evening.  I find it interesting that once again, at Christmas time this story hits the news.  If you missed it, there are multiple articles and videos related to the topic easily located … Click Here to Read More