Blatant Satan worship is now rampant within the Catholic Church. High-ranking churchmen are guilty of this heinous crime against God. According to one reliable source, the smoke of Satan has entered the very sanctuary of St. Peter’s Cathedral in the Vatican. Mind-boggling though it may be, priests and bishops alike are known to have taken contract oaths to serve the devil, signed in their own blood! 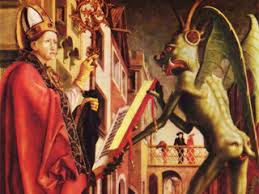 These amazing facts about devil worship inside the Vatican and its subsidiaries have come not from hostile Protestant critics of Roman Catholicism, but from top-ranking Catholic prelates themselves. Evidently, this awful malignancy is so far advanced that Satanism has reached the papacy itself and has seriously affected the rank and file of nuns and priests in the U.S.A. and throughout the globe. Untold numbers of outright Satan worshippers are now masquerading as Catholic clergy while secretly paying homage to Lucifer.
Lucifer is Enthroned”
Catholic scholar Dr. Malachi Martin, formerly a Jesuit professor at Georgetown University and a confidant of Vatican insiders, flatly declared in a recent New York City interview: “Yes, it’s true. Lucifer is enthroned in the Catholic Church.”
Martin was also interviewed by The Fatima Crusader, a well-known Catholic publication. He again repeated his allegations and expressed his dismay and distress that the Catholic institution of which he is a part has grown so decadent and morally reprobate since the Vatican II conference of the 60s. The contention that there are Satanists in Rome is “completely correct” said Martin, adding:
“Anybody who is acquainted with the state of affairs in the Vatican in the last 35 years is well aware that the prince of darkness has and still has his surrogates in the court of St. Peter in Rome.”

Just how bad did Martin judge things to be? Extremely so:”Suddenly it became unarguable that now during this papacy, the Roman Catholic organization carried a permanent presence of clerics who worshipped Satan and liked it; of bishops and priests who sodomized boys and each other; of nuns who performed the “Black Rites” of Wicca, and who lived in lesbian relationships . . . every day, including Sundays and Holy Days, acts of heresy and blasphemy and outrage and indifference were committed and permitted at holy Altars by men who had been called to be priests. Sacrilegious actions and rites were not only performed on Christ’s Altars, but had the connivance or at least the tacit permission of certain Cardinals, archbishops, and bishops. . . In total number, they were a minority—anything from one to ten percent of Church personnel. But of that minority, many occupied astoundingly high positions or rank…. The facts that brought the Pope to a new level of suffering were mainly two: The systematic organizational links—the network, in other words, that had been established between certain clerical homosexual groups and Satanist covens. And the inordinate power and influence of that network.” (pp. 492-3)

At the time of his passing on July 27, 1999, Martin was at work on what he said would be his most controversial and important book. Primacy: How the Institutional Roman Catholic Church became a Creature of The New World Order was to deal with power and the papacy.

This work was to analyze the revolutionary shift that lies at the heart of what many see as the breakdown of papal power. It was to be a book of predictions about the Vatican and the world in the first decades of the new millennium.Fr. Malachi Martin never recanted any of his claims that the scene in Windswept House was based on an actual satanic ritual in the Vatican in the first days of the reign of Pope Paul VI, nor that there exists a general satanic conspiracy within the Roman Catholic Church.

The Truth is the Roman Empire Never Died

Constantine never became a true believer in Jesus Christ. The Romans wanted to rid themselves of the Jews and this Jesus character. They were having difficulty destroying the faith, so they decided to use it to their advantage. They saw an opportunity to unite the world under one religion and one government. So, they created the HOLY ROMAN Catholic Church. They never changed the gods or goddesses they worshipped, only thier names. Nor did they change the manner in which they worshipped them. They did manage to destroy all semblance of the faith of the Jews, from the “Christian” faith. Destroying the root, to which the believer is supposed to be grafted. The Romans established their empire and when it became truly threatened, just took it underground. If you research for yourself, you will soon find that we are an intrical part of that empire. Everything about the “United States” is ROMAN. Our language, our laws, our culture, our holidays, our calendar, our numbering system. WE are Rome. Rome is alive and well and ruled by the Vatican. Which is ruled by Satan.

When thou art come into the land which the Lord thy God giveth thee, thou shalt not learn to do after the abominations of those nations. There shall not be found among you any one that maketh his son or his daughter to pass through the fire, or that useth divination, or an observer of times, or an enchanter, or a witch. Or a charmer, or a consulter with familiar spirits, or a wizard, or a necromancer. For all that do these things are an abomination unto the Lord: and because of these abominations the Lord thy God doth drive them out from before thee. Deuteronomy 18:9-12 Necromancy is a special mode of divination by the evocation of the dead. Understood as nigromancy (niger, black), which is the Italian, Spanish and old French form, the term suggests “black” magic or “black” art, in which results are due to the agency of evil spirits, while in “white” magic they are due to human dexterity and trickery. The practice of necromancy supposes belief in the survival of the soul after death, the possession of a superior knowledge by the disembodied spirit, and the possibility of communication between the living and the dead. The Catacombs of Paris are underground ossuaries in Paris, France, which hold the remains of more than six million people in a small part of a tunnel network built to consolidate Paris’ ancient stone mines. Catacombs of Rome – During the Revolution, people were buried directly in the Catacombs. Guillotine victims ended up there, too, including the likes of Maximilien Robespierre, Antoine Lavoisier, and Georges Danton, all beheaded in 1794. The Catacombs hold the artfully arranged remains of 6 to 7 million Parisians.

9 of the Strangest Bone Churches of Europe

Let’s Talk About The Catholic Church: Its Satanic History Exposed

The Vatican has been embroiled in two separate, highly embarrassing, scandals.

The other, which has generated – if possible – even more lurid press coverage in Italy, alleges a priest in the south of the country is under investigation on suspicion of murdering one of his parishioners.

Father Gratien Alabi, from the Democratic Republic of Congo, is under investigation for murder following the discovery of female bones under the flagstones of an ancient mountain chapel.

The bones are anticipated to belong to Guerrina Piscaglia, 50, who disappeared from nearby Arezzo in Tuscany last year, The Times reported.

The case has generated intense media interest, with some papers claiming that Father Alabi had engaged in an affair with the woman, a parishioner of his and another priest’s church, and fathered a child with her.

3. The Vatican-owned building in which the raid happened is currently being used by various high-ranking churchmen, including prefects, presidents, and secretaries to the Roman Curia. Police reportedly became suspicious after tenants in the building complained repeatedly about constant comings and goings of visitors to the building during all hours of the night.

4. At the time of the arrest, Capozzi was allegedly so high on cocaine that he was hospitalized for detoxification for a short period in the Pius XI clinic in Rome.

Eyewitnesses Testify: Pope Francis Raped and Killed Children; Sealed Vatican Documents Expose Their Satanic Rituals –
http://humansarefree.com
Pope Francis, the Jesuits and the Church of England will be prosecuted for child trafficking and genocide. The Queen of England was already found guilty by a previous trial. International Tribunal into Crimes of Church and State litigation in the Brussels Common Law Court of Justice.
Five judges and 27 jury members from six countries including the USA, considered evidence on over 50,000 missing Canadian, US, Argentine and European children who were suspected victims of an international child sacrificial cult referred to as the Ninth

Satan Lucifer is under the Vatican

The Pope Is Hiding Something Ancient From The Public

Do You Believe in Magick continues Part 30 – The Reptilian Race